Seoul says no decision on U.S. drills, but exercises should not create North Korea tension 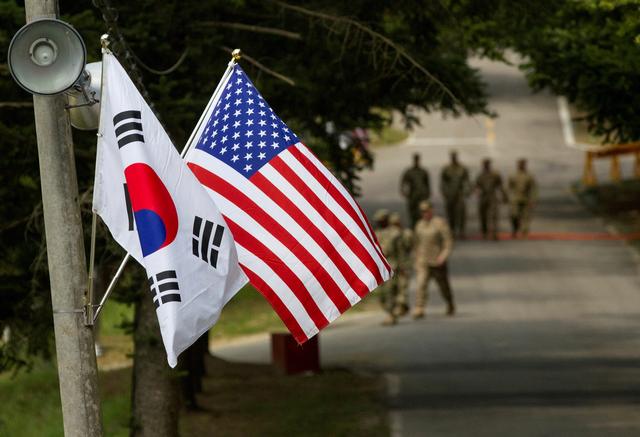 FILE PHOTO: The South Korean and American flags fly next to each other at Yongin, South Korea, August 23, 2016. Courtesy Ken Scar/U.S. Army/Handout via
Reuters
By Hyonhee Shin | SEOUL

SEOUL South Korea said on Monday no decision has yet been made on its joint military exercises with the United States but they should not create tension, after North Korea warned the South against holding the exercises amid signs of a thaw in relations.

South Korea and the United States regularly stage military exercises, mainly in the spring and summer, which North Korea routinely denounces as rehearsals for war.

Kim Yo Jong, sister of North Korean leader Kim Jong Un and a senior official of the ruling Workers' Party, warned Seoul on Sunday that holding the drills would undercut efforts to rebuild relations.

South Korea's defence ministry said Seoul and Washington were in talks over the drills but no decision had yet been made.

"We have nothing to comment on her statement, but regarding the exercises, the timing and method have not been finalised," ministry spokesman Boo Seung-chan told a briefing.

He said the allies would make a decision after considering COVID-19, joint defence posture, planned transfer of wartime operational control, and the issue of "supporting diplomatic efforts for establishing lasting peace on the Korean peninsula."

Lee Jong-joo, spokeswoman of Seoul's Unification Ministry, which handles inter-Korean affairs, said the exercises should not be a "source of military tension in any case", without elaborating.

The Pentagon also declined to comment on Kim Yo Jong's statement. It said it did not comment on "planned or conducted training readiness" but "combined training events" were a bilateral decision "and any decisions will be a mutual agreement."

A U.S. State Department spokesperson reiterated that Washington "supports inter-Korean dialogue and engagement, and welcomes the recent developments related to inter-Korean communication," adding that "diplomacy and dialogue are essential to achieving the complete denuclearisation of the Korean Peninsula."

A U.S. official briefing reporters ahead of a series of virtual regional meetings this week, said North Korea's foreign minister was expected to attend one, the ASEAN Regional Forum, but Blinken, who would also take part, had no plan to engage with him on any particular issue.

U.S.-South Korea exercises have been scaled back in recent years to facilitate talks between North Korea and the administration of former U.S. President Donald Trump aimed at dismantling Pyongyang's nuclear and missile programmes in return for U.S. sanctions relief.

But the negotiations stalled following a failed second Trump-Kim summit in 2019.

The pandemic has affected the drills, with the allies focusing on computerised simulations and minimising live field training without mobilising U.S.-based troops.

A high-level Unification Ministry official said on Friday the exercises should be postponed to help restart talks, but Lee declined to comment when asked if the ministry plans to make a formal recommendation.

(Reporting by Hyonhee Shin in Seoul; additional reporting by Idrees Ali and David Brunnstrom in Washington; Editing by Michael Perry and Sandra Maler)