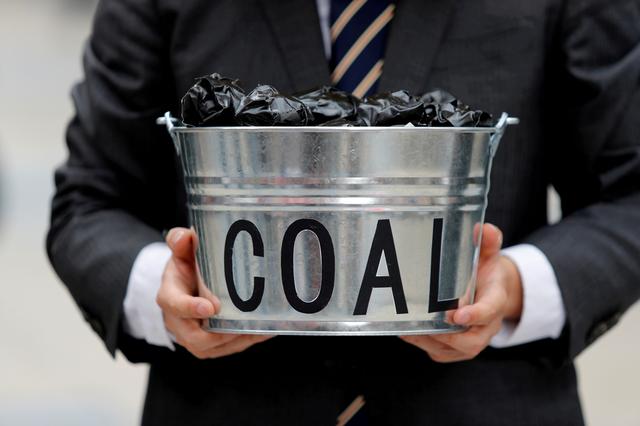 FILE PHOTO: A protester holds a bucket of coal during a demonstration demanding Japan to stop supporting coal at home and overseas, at the G20 Summit in Osaka, Japan, June 28, 2019.
Reuters/Jorge Silva/File Photo
By Clara Denina and Melanie Burton | LONDON/MELBOURNE

LONDON/MELBOURNE Financial firms including British insurer Prudential, lenders Citi and HSBC and BlackRock Real Assets are devising plans to speed the closure of Asia's coal-fired power plants in order to lower the biggest source of carbon emissions, five people with knowledge of the initiative said.

The novel proposal, which is being driven by the Asian Development Bank, offers a potentially workable model and early talks with Asian governments and multilateral banks are promising, the sources told Reuters.

The group plans to create public-private partnerships to buy out the plants and wind them down within 15 years, far sooner than their usual life, giving workers time to retire or find new jobs and allowing countries to shift to renewable energy sources.

It aims to have a model ready for the COP26 climate conference which is being held in Glasgow, Scotland in November.

"The private sector has great ideas on how to address climate change and we are bridging the gap between them and the official-sector actors," ADB Vice President Ahmed M. Saeed said.

The initiative comes as commercial and development banks, under pressure from large investors, pull back from financing new power plants in order to meet climate targets.

Saeed said that a first purchase under the proposed scheme, which will comprise a mix of equity, debt and concessional finance, could come as soon as next year.

"If you can come up with an orderly way to replace those plants sooner and retire them sooner, but not overnight, that opens up a more predictable, massively bigger space for renewables," Donald Kanak, chairman of Prudential's Insurance Growth Markets, who came up with the idea, told Reuters.

Coal-fired power accounts for about a fifth of the world's greenhouse gas emissions, making it the biggest polluter. The proposed mechanism entails raising low cost, blended finance which would be used for a carbon reduction facility, while a separate facility would fund renewable incentives.

Finding a way for developing nations in Asia, which has the world's newest fleet of coal plants and more under construction, to make the most of the billions already spent and switch to renewables has proved a major challenge.

The International Energy Agency expects global coal demand to rise 4.5% in 2021, with Asia making up 80% of that growth.

Meanwhile, the International Panel on Climate Change (IPCC) is calling for a drop in coal-fired electricity from 38% to 9% of global generation by 2030 and to 0.6% by 2050.

The proposed carbon reduction facility would buy and operate coal-fired power plants, at a lower cost of capital than is available to commercial plants, allowing them to run at a wider margin but for less time in order to generate similar returns.

The cash flow would repay debt and investors.

The other facility would be used to jump start investments in renewables and storage to take over the energy load from the plants as it grows, attracting finance on its own.

The model is already familiar to infrastructure investors who rely on blended finance in so-called public-private deals, backed by government-financed institutions.

In this case, development banks would take the biggest risk by agreeing to take first loss as holders of junior debt as well as accepting a lower return, according to the proposal.

"To make this viable on more than one or two plants, you've got to get private investors," Michael Paulus, head of Citi's Asia-Pacific public sector group, who is involved in the initiative, told Reuters.

The framework has already been presented to ASEAN finance ministers, the European Commission and European development officials, Kanak, who co-chairs the ASEAN Hub of the Sustainable Development Investment Partnership, said.

Details still to be finalised include ways to encourage coal plant owners to sell, what to do with the plants once they are retired, any rehabilitation requirements, and what role if any carbon credits may play.

The firms aim to attract finance and other commitments at COP26, when governments will be asked to commit to more ambitious emissions targets and increase financing for countries most vulnerable to climate change.

U.S. President Joe Biden's administration has re-entered the Paris climate accord and is pushing for ambitious reductions of carbon emissions, while in July, U.S. Treasury Secretary Janet Yellen told the heads of major development banks, including ADB and the World Bank, to devise plans to mobilize more capital to fight climate change and support emission cuts.

A Treasury official told Reuters that the ADB's plans for coal plant retirement are among the types of projects that Yellen wants banks to pursue, adding the administration is "interested in accelerating coal transitions" to tackle the climate crisis.

As part of the group's proposal, the ADB has allocated around $1.7 million for feasibility studies covering Indonesia, Philippines and Vietnam, to estimate the costs of early closure, which assets could be acquired, and engage with governments and other stakeholders.

"We would like to do the first (coal plant) acquisition in 2022," ADB's Saeed told Reuters, adding the mechanism could be scaled up and used as a template for other regions, if successful. It is already in discussions about extending this work to other countries in Asia, he added.

To retire 50% of a country's capacity early at $1 million-$1.8 million per megawatt suggests Indonesia would require a total facility of roughly $16-$29 billion, while Philippines would be about $5-$9 billion and Vietnam around $9-$17 billion, according to estimates by Prudential's Kanak.

One challenge that needs to be tackled is the potential risk of moral hazard, said Nick Robins, a London School of Economics sustainable finance professor.

"There's a longstanding principle that the polluter should pay. We need to make absolutely sure that we are not paying the polluter, but rather paying for accelerated transition," he said.