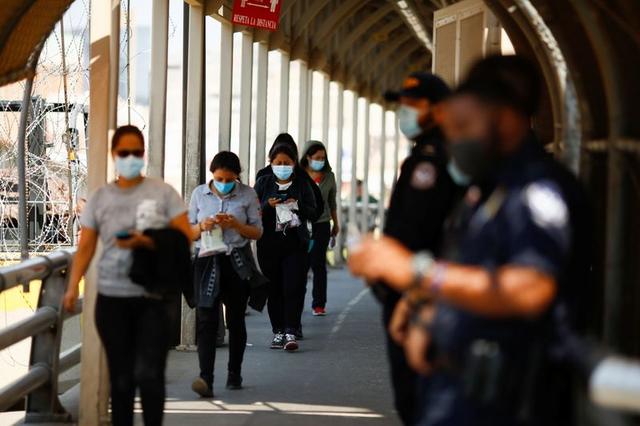 FILE PHOTO: Migrants expelled from the U.S. and sent back to Mexico under Title 42 walk towards Mexico at the Paso del Norte International border bridge, in this picture taken from Ciudad Juarez, Mexico September 9, 2021.
Reuters/Jose Luis Gonzalez
By Daniel Wiessner

The Biden administration on Friday moved to revive an order put in place by then-President Donald Trump directing the expulsion of migrant families caught crossing the U.S.-Mexico border amid the COVID-19 pandemic, a day after a U.S. judge blocked it.

The U.S. Department of Justice filed an appeal with a Washington-based appellate court of Thursday's ruling by U.S. District Judge Emmet Sullivan, who said the public health law the policy is based on, Title 42, does not authorize the expulsion of migrants.

President Joe Biden has faced growing pressure from some health experts, immigration advocates and fellow Democrats to stop applying the Title 42 order, which has essentially cut off access to asylum for hundreds of thousands of migrants.

The Biden administration has said the Title 42 policy remains necessary to limit the spread of the coronavirus, although it has not provided scientific data to support that rationale and many public health experts have opposed it.

Friday's appeal with the U.S. Court of Appeals for the D.C. Circuit involved a lawsuit by advocacy groups, including the American Civil Liberties Union (ACLU) and Oxfam America.

Noah Gottschalk, global policy lead for Oxfam, said the group was confident the judge's decision would be upheld.

"It's extremely disappointing that the Biden administration is willing to fight tooth and nail to uphold President Trump's xenophobic immigration policies," Gottschalk said in a statement.

The Trump administration first adopted the expulsion policy in March 2020, at the outset of the COVID-19 pandemic. Republican President Trump put into effect tough policies on legal and illegal immigration before the coronavirus struck.

Biden in February exempted unaccompanied children from the policy, and his administration had been applying it to fewer families apprehended at the border.

The judge's order only applies to families and not to single adults, who represent most of the migrants arrested at the border.