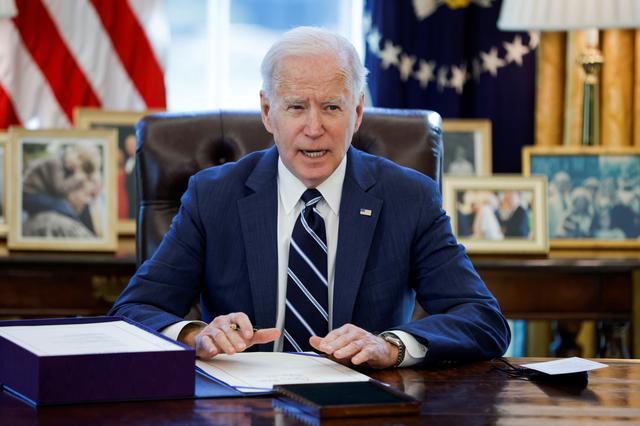 1/2
FILE PHOTO: U.S. President Joe Biden signs the American Rescue Plan, a package of economic relief measures to respond to the impact of the coronavirus disease (COVID-19) pandemic, inside the Oval Office at the White House in Washington, U.S., March 11, 2021.
Reuters/Tom Brenner + 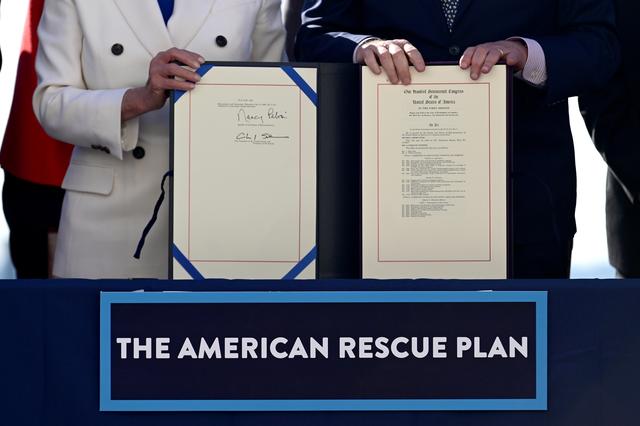 WASHINGTON (Reuters) -A one-year expansion of the U.S. child tax credit, a policy championed by President Joe Biden and his fellow Democrats over Republican opposition, has disproportionately benefited states that voted for former President Donald Trump in 2020, a Reuters review of Treasury Department data has found.

Congressional Democrats are now seeking to extend the expansion for four additional years as part of $3.5 trillion social spending legislation opposed by Trump's fellow Republicans. The one-year expansion - part of COVID-19 pandemic relief legislatihere signed by Biden in March, is expected to funnel $105 billion to American families, many still hurting from the economic effects of the public health crisis.

The policy's support among Republicans far outstripped their 11% backing for Biden's overall job performance in a separate Reuters/Ipsos poll.

The policy's popularity, experts said, might benefit Democrats in elections next year that will determine whether they retain control of Congress for the second half of Biden's term. Democrats are defending razor-thin majorities in the Senate and House of Representatives.

"That could make a difference in a whole lot of places where we have close Senate and House races," said Norman Ornstein, an expert on elections at the American Enterprise Institute.

The top 10 states by average monthly child tax credit payments in August - all from the West and Midwest - were: Utah, Idaho, South Dakota, Alaska, Nebraska, Wyoming, North Dakota, Iowa, Kansas and Montana, with monthly payments ranging from $515 to $456 in August. All voted last year for Trump over Biden and all but Kansas have Republican governors.

Of the 10 states with the lowest average payments, only one - Florida - backed Trump, also having a Republican governor. Massachusetts residents received the smallest average household payment in August: $387. (For a state-by-state graphic on the tax credit, see tmsnrt.rs/397E5B2)

In Wisconsin and Arizona - states that Biden narrowly won last year and are shaping up to have competitive Senate races next year - average payments in August were just under $450.

The policy gets cash to families even before they square annual tax bills. Republican-led states tend to have lower household incomes than states with Democratic leadership such as California and New York, thus benefiting more from the policy, which reduces tax credits to upper-income households.

Since July, the U.S. Treasury has given more than 35 million households about $250 to $300 a month for each child under age 18, a policy some analysts say is already significantly reducing childhood poverty.

A four-year extension would make it a significant slice of the proposed $3.5 trillion spending package being pursued by Democratic congressional leaders. That legislation is opposed by congressional Republicans as too expensive. Even some Democrats including pivotal Senator Joe Manchin have questioned its price tag. The Treasury Department on Wednesday released a report on the shortfalls of the U.S. childcare system and said expanded child tax credits would help parents pay for childcare.

The tax credit already is being felt by Americans benefiting from it.

Lolitha Maria Scott, a 41-year old call center worker in Phoenix with five children, described the tax credit as a lifeline that she thinks should continue beyond this year because many working parents like her struggle to keep up with rising rent bills.

"I understand people say it's costly for the budget but it also helps the American people," Scott said in an interview.

Scott said the policy helped cement her plan to vote for Democratic Senator Mark Kelly, who is seeking re-election next year in Arizona.

Jeremy Monk, 43, an occupational therapist in Palm Bay, Florida, voiced concern that paying for such policies could lead to higher taxes in the future. Monk, a Republican, said in an interview that taking the payments made him feel like he is robbing from his children's future.

"It puts a little bit of a shiver up my spine," said Monk, who added that he put his tax credit payment in college savings funds for his son and daughter.

(Reporting by Jason Lange and Chris Kahn; Editing by Will Dunham and Scott Malone)