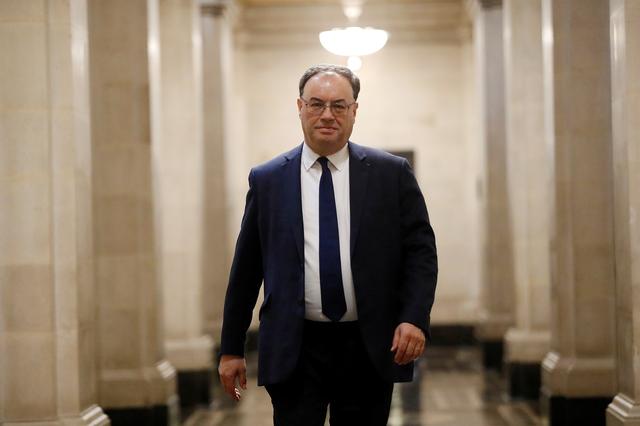 FILE PHOTO: Bank of England Governor Andrew Bailey poses for a photograph on the first day of his new role at the Central Bank in London, Britain March 16, 2020. Tolga Akmen/Pool via
Reuters/File Photo
By David Milliken | LONDON

LONDON Bank of England Governor Andrew Bailey said there is a significant risk of further disappointments to UK economic growth, and that the country faced unprecedented uncertainty as coronavirus cases began to climb again.

Britain's economy shrank by 20% in the three months to June, the biggest drop of any large advanced economy, and Bailey reiterated that he expected output at the end of the third quarter was 10% below its level at the end of 2019.

"Ten percent is still a huge gap, let's be clear on that," Bailey told an online seminar for central bank governors hosted by the Group of Thirty, a panel of economic policymakers and senior bankers on Sunday.

"We're operating at an unprecedented level of economic uncertainty. Of course, that is heightened now by the return of COVID.... The risks remain very heavily skewed towards the downside," he added.

The number of new COVID-19 cases in Britain has surged in recent weeks, forcing the government to shorten bar and restaurant opening hours and limit the extent to which people can meet outside of work or school.

Sticking closely to previous messages on the outlook for policy, Bailey said the best approach was to act aggressively, rather than cautiously, in the face of uncertainty.

Many economists expect the BoE to announce further bond purchases on Nov. 5 following its next policy meeting, on top of the 310 billion pounds ($400 billion) of asset purchases already underway since the start of the pandemic.

Choosing the right policy tools would be important in future as the effectiveness of both quantitative easing and negative interest rates depended on the state of the economy and the structure of the financial system, Bailey added.

"Our assessment of negative interest rates, from the experience elsewhere, is that they probably appear to work better in a more wholesale financial market context, and probably better in a nascent economic upturn," he said.

Last week the BoE asked banks how feasible it would be to implement below-zero interest rates, and in August set out a range of considerations before it would go down the path taken by the European Central Bank and Bank of Japan.

Bailey also reiterated that the BoE did not target sterling's exchange rate, but did take its level into account, and that exchange rate moves had contributed to the BoE's ability to meet its 2% inflation target.