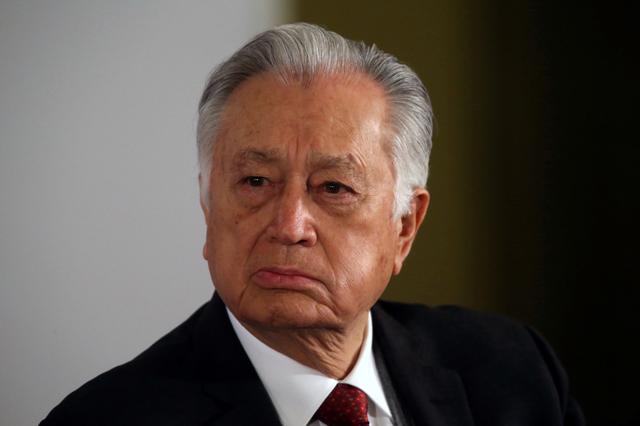 MEXICO CITY Private renewable energy firms in Mexico should pay for part of the baseload power underpinning the flow of electricity on the grid, the head of the state power company said on Friday, as a dispute on the future of the local industry roils the market.

Manuel Bartlett, director of the Comision Federal de Electricidad (CFE) and staunch defender of the state, told Reuters he favors more clean energy and wants to reduce Mexico's use of fuel oil as a major source of power generation.

But he said renewable operators had not been pulling their weight in contributing to the infrastructure that sustains them.

"Wind and photovoltaic (plants) don't pay the CFE for the backup," said Bartlett, referring to the cost of power generation from fossil fuels, mostly natural gas, to guarantee uninterrupted flow.

"Do you think it's fair for the CFE to subsidize these companies that don't produce power all day?" he asked.

The firms should also start helping to pay transmission costs, he said.

"That's not a free market, it's theft," said Bartlett, a close ally of President Andres Manuel Lopez Obrador, who has pledged to hold down electricity rates.

Renewable companies argue they can produce more efficiently than the CFE and help Mexico reduce its emissions.

CENACE cited the coronavirus pandemic as a justification, arguing that intermittent wind and solar power is not consistent with ensuring constant electricity supply.

Business associations said the move put more than $6 billion in renewable power plants scheduled to begin operating this year or next in limbo.

In a provisional ruling this week, a judge ordered CENACE to back down and allow the renewable firms to continue for now with tests needed to bring plants online.

Bartlett, an 84-year-old former interior minister who has been a force in Mexican politics for decades, said he is not seeking to restore CFE's decades-long monopoly that was ended by the previous government.

But he said Lopez Obrador has instructed him to ensure the CFE generates at least 54% of power output, its current level.

"I accept that there's going to be private investment."

Last Friday, the energy ministry moved aggressively to give the government more control over power supplies by seeking fast-tracked regulatory approval for a ruling designed to give the state more say over who can generate electricity and how much, again citing the pandemic as a rationale.

The move promoted the head of a government regulatory commission to abruptly resign.

Bartlett described the notion that the government is resisting more renewable energy as a "lie."

"We are not troglodytes, we're serious people," he said, adding that he favors cleaner-burning natural gas.

Nevertheless, the government last year canceled a planned auction to purchase renewable energy via long-term contracts, another policy promoted by the last government.

It also sought to disincentivize a clean-energy certificate scheme, arguing it put the CFE at a disadvantage.

'This could be the one that gets me,' says oilfield service veteran