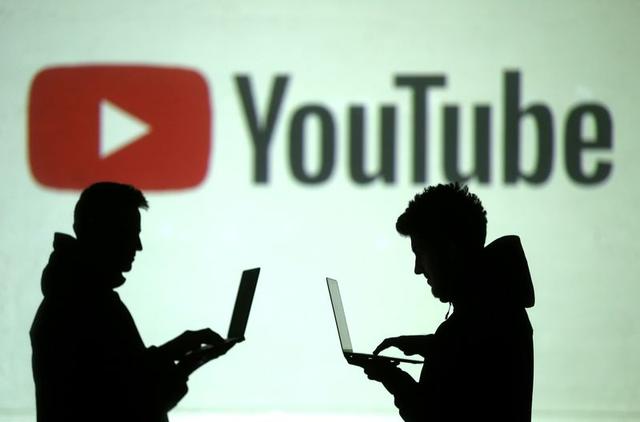 Silhouettes of mobile device users are seen next to a screen projection of Youtube logo in this picture illustration taken March 28, 2018.
Reuters/Dado Ruvic/Illustration
By Jennifer Saba | NEW YORK

NEW YORK (Reuters Breakingviews) - The race to the White House is well underway. President Donald Trump has already bought prominent advertising on YouTube on Election Day. Yet parent Alphabet is in regulators’ crosshairs and campaign money is a tiny slice of revenue. It’s a wonder why the $1 trillion company accepts political ads at all.

Trump’s campaign bought out the home page on Nov. 3, according to a Bloomberg article published on Thursday. That’s because YouTube has enormous reach. About two-thirds of American adults say they used the video service last year, according to the Pew Research Center. That’s even more than those who went to Facebook.

Trump isn’t the first politician to splash out in a big way on YouTube. Former President Barack Obama did the same on Election Day in 2012, according to the article. Billionaire Michael Bloomberg who is making a bid for the White House tops the list for spending the most on Google from the end of May 2018 until Feb. 18. During that period, Google reported $204 million in political advertising spend. This represents a tiny fraction, well under 1%, of its total revenue for the quarter ending June 2018 until the end of last year.

The fact it can be bought at all, no matter the candidate, on the day Americans go the polls seems like an unfair advantage. The backdrop doesn’t help. The Russians manipulated YouTube and Facebook in an effort to sway the 2016 U.S. presidential elections. Just last week, top U.S. intelligence officials warned Congress that the Kremlin was at it again, trying to boost Trump’s prospects of winning.

Regulators are only intensifying their scrutiny of Silicon Valley. Facebook boss Mark Zuckerberg and Alphabet Chief Executive Sundar Pichai were hauled in front of Congress in 2018 to testify about their platforms’ influence. The Department of Justice and the Federal Trade Commission have divided up tech companies and are probing if they have acted anti-competitively. Attorney General William Barr is contemplating revoking nearly 25-year-old protections that give YouTube and other tech platforms broad immunity to what they publish.

Google has pulled in the reins, but just a little. In November, it tightened its policy prohibiting microtargeting of political advertising. That’s still not as far as Twitter, which ditched the category altogether. Google and YouTube are needlessly making their platforms a political football.