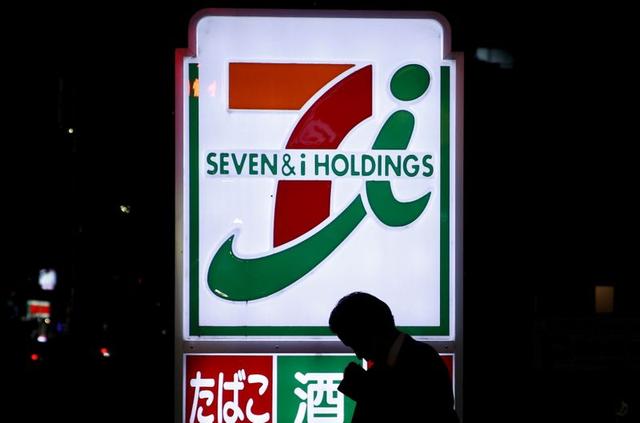 A pedestrian walks in front of a signage of Seven & I Holdings' 7-Eleven convenience store in Tokyo, Japan, in this April 7, 2016 file photo.
By Alec Macfarlane | HONG KONG

HONG KONG (Reuters Breakingviews) - Japan’s Seven & i risks overfilling the tank. The $31 billion 7-Eleven convenience store empire is in exclusive talks to buy Marathon Petroleum’s Speedway petrol stations for roughly $22 billion, Bloomberg reported, news that erased $3.3 billion from its market value. Seven & i already has a credible foothold in the United States and a clean balance sheet, but the bid values it far more richly than peers. An all-cash deal might provide leverage without fat returns.

Under pressure from activists, Marathon planned to spin off its Speedway division, which the U.S. petroleum giant reckoned could be worth up to $18 billion including debt. The news piqued the interest of Seven & i, which already runs the biggest chain of convenience stores in the United States, as well as a portfolio of over 1,000 gas stations and corner stores through a 2018 deal with Sunoco. Speedway would add another 4,000. Seven & i has proved itself adept at wringing cash out of stores. Each Sunoco store sold $5,000 of goods in the third quarter, up 51% year-on-year.

Still, Seven & i will need to sweat to make the numbers work. Marathon estimated in October 2019 that Speedway would generate $1.5 billion in EBITDA in 2019. A $22 billion price tag is 14.7 times that. Peers Alimentation Couche-Tard, Casey’s General Stores and Parkland Fuel trade at 13, 13.6 and 8.6 times, respectively. The returns don’t look amazing, either. Strip out 25% in depreciation and amortisation, in line with Marathon’s overall retail segment, and the return on invested capital amounts to 4%, according to Breakingviews calculations. Given similar U.S. businesses have a 6%-8% weighted average cost of capital, the buyer would need to eke out hefty synergies.

Seven & i would at least head into a deal with over $4 billion of net cash, according to Refinitiv data. It may also choose to finance the deal in Japan, where ultra-low interest rates make dealmaking cheap. But it has its own share of problems, too. The company is in the midst of a restructuring involving the closure of unprofitable convenience stores and the elimination of 3,000 jobs, following years of poor performance. Total returns have consistently lagged the Topix index. Adding Speedway could push net debt to around 3 times EBITDA, while peers are generally below 2. That might be why investors reacted to the news by sending shares down 9%.