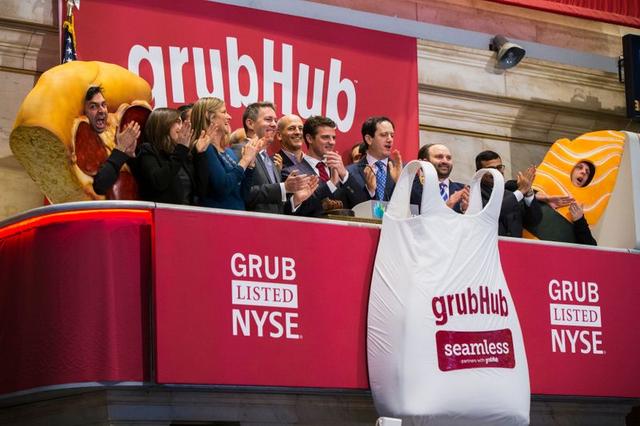 NEW YORK/SAN FRANCISCO (Reuters Breakingviews) - Uber Technologies and DoorDash have turned up the heat on older food-delivery rival Grubhub. Brutal competition from the two relative newcomers stripped the $4.8 billion outfit of its position as the big cheese of the industry. It also drove the company into the red last year for the first time. But Grubhub has the edge over its rivals.

That may sound odd considering Chief Executive Matt Maloney expects more pain in 2020. He told shareholders earlier this month that revenue will slow to what for Grubhub is a pedestrian 15%, while EBITDA adjusted to exclude items like stock-based compensation will almost halve to $100 million.

Meanwhile, Uber Chief Executive Dara Khosrowshahi reckons expenses at Uber Eats will peak in the first quarter of 2020. Last year’s decisions to pull out of South Korea and sell most of its India venture both help with that.

And DoorDash, which like Uber is backed by SoftBank Group, has displaced Grubhub as the U.S. market leader, according to Second Measure. To gain share it tapped private investors for funds three times in 2019, according to Crunchbase. The latest, in November, valued it at nearly $13 billion – roughly what Grubhub was worth at its peak in 2018 before problems hit.

Fixing them won’t be easy, as Maloney’s 2020 forecast and earlier warnings make clear. But financially it is in a far better position than Uber Eats, which posted an adjusted EBITDA loss of $461 million last quarter alone, a 66% jump from the same period in 2018. And DoorDash’s multiple rapid-fire funding rounds suggest expansion is coming at a cost.

Grubhub’s bread and butter is with what it calls partnered restaurants, because it can take a bigger cut of an order than usual in exchange for marketing and promotion. That can bring in a 10% profit, as opposed to deliveries made with non-partnered eateries. Trouble is, Grubhub had to expand its menus to keep up with its peers. It added 150,000 non-partnered establishments at the end of the quarter making up nearly half of its total restaurants. The more special relationships Maloney can cook up, though, the more of an earnings edge he should have.