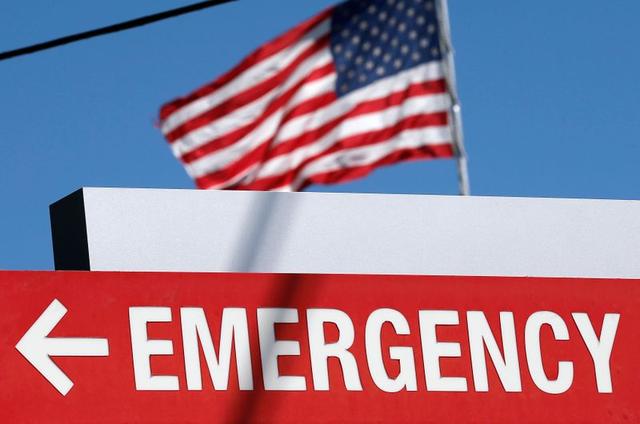 An entrance sign to the Texas Health Presbyterian Hospital is seen in Dallas, Texas, October 4, 2014.
By Edward Hadas | LONDON

LONDON (Reuters Breakingviews) - When western Europeans ask Americans about the difficulties of their lives, healthcare almost always comes up. Almost everyone, whether healthy or unwell, can go on for what feels like hours about bills, premiums, forms, plans and the latest complex negotiation with this insurer or that hospital.

Europeans are usually awestruck, and not in a good way. True, they often moan about their own healthcare systems, some of which come with a fair amount of paperwork. However, the final cost of care is almost always negligible, the poor get pretty much as good a service as the rich, and almost all the horror stories are medical rather than monetary.

A look at the numbers only deepens the European amazement. Calculations from the Organisation for Economic Co-operation and Development show that its 15 large western European member states spent an average of 10% of GDP on healthcare in 2018, with Switzerland’s 12.2% at the top of the list. At 16.9%, the United States is a huge outlier. And that does not count the value of the time spent arguing and complaining.

If Americans’ additional $4,300 annual spending per person clearly bought better health, then the Europeans might shut up. The system might be expensive, complicated and frustrating, but they would have to admit that it does the job.

It doesn’t. The OECD measure of “potential years of life lost”, a rough index of healthcare outcomes for people under 75, was 78% more in the United States than the 15-country European average in 2016, the latest year with comparable data. In the previous decade, the U.S. result fell by a meagre 4%, well below the Europeans’ 20% decline.

To be fair, the American tendencies to obesity, drug abuse and gun violence do a lot of damage to public health, not to mention the country’s weaker welfare state. Comparative studies of actual medical results “do not systematically point toward worse quality of care in the United States compared with other OECD countries”. That is the conclusion of a survey published in the U.S. Annual Review of Public Health in 2014. In other words, Americans pay 70% more than Europeans, as a share of GDP, to get about as good healthcare.

Europeans in the know often suggest that Americans should copy their own healthcare system. The French and Germans like their mix of insurance payments based on income and ample patient choice of treatment. British people are especially fond of their more monolithic National Health Service. Several Democratic party presidential candidates agree. They are mostly keen on “Medicare for All”, which would be close to the NHS. Others want to expand something like Obamacare, which looks like a badly put together knock-off of a continental European arrangement.

However, what looks like a no-brainer to Europeans is a no-go area for many American voters. Why? There are three explanations for the American disregard for global healthcare best practice.

The first is privilege. Americans with very generous private insurance sometimes receive better medical care than their European peers, and are always better looked after than poorer Americans. Their desire to preserve this status advantage often seems to be stronger than any yearning for a more efficient system or commitment to social justice.

For example, Tom Steyer, who is vying for the Democratic presidential nomination, thinks it makes political sense to oppose Medicare for All. He promises to protect generous “union-negotiated plans”. Most Europeans would find that attitude unjust, as would followers of John Rawls, the distinguished American political philosopher who died in 2002. But contrary to Rawls’s hopes, the vigorous defence of inequality has become a hallmark of the American way of life.

Entrenched practices are the second explanation. Development economists are familiar with the problem. They often marvel at how poor countries often cling to unhelpful social arrangements, even when fairly readily available alternatives would bring clear advantages to everyone except a few insiders. The problem is that those insiders are generally respected and are always politically powerful, so they frequently get their way.

The United States is certainly not a poor country, but its healthcare debate follows the entrenchment pattern. Consider the American Medical Association, a powerful physicians’ lobbying group. It says it opposes Medicare for All to defend “pluralism, freedom of choice [and] freedom of practice”. Those claims are hard to justify, but a strong single provider would undoubtedly limit doctors’ incomes.

Finally, there is tax-phobia. This long-standing American principle, or perhaps endemic American disease, clouds many minds. The distrust of government leads people not to notice that private health insurance already works like a tax, a particularly iniquitous one. When every insured worker pays the same premium, the lowest pre-premium incomes are reduced by the highest percentage.

Shifting to a tax, say 6% of income, would amount to a raise in take-home pay for 90% of American workers, according to economist Gabriel Zucman. The relatively poor would do especially well. For someone with an average health insurance plan and a $40,000 annual income, the premium-to-tax substitution would be the equivalent of a 22% increase.

Americans are unlikely to tell Europeans that their healthcare is so inefficient, because too many of them are selfish or confused. But that is painfully close to the truth.