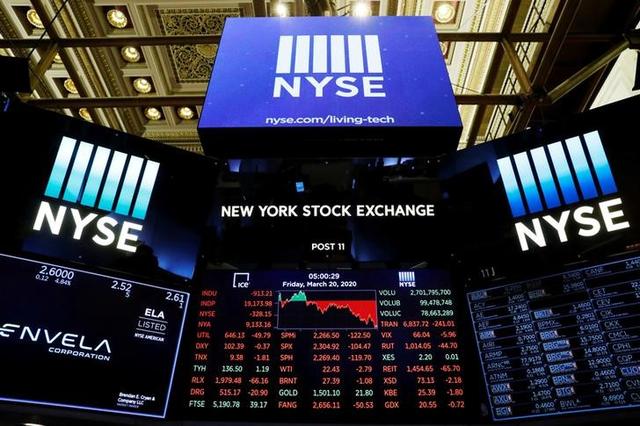 FILE PHOTO: The final numbers of the day are displayed above the floor of the New York Stock Exchange. New York, U.S., March 20, 2020.
Reuters/Lucas Jackson/File Photo
By Ritvik Carvalho and Tommy Wilkes | LONDON

LONDON More than 300 basis points in combined interest rate cuts, a tenth of annual output in central bank stimulus and $5 trillion of new government spending and credit guarantees - authorities in the world's biggest economies are showering cash like never before to limit the damage from the coronavirus pandemic.

With infection rates surging in Europe and the United States, the global economy is tipped for recession in 2020, and many countries are expected to suffer the deepest downturn in decades as business, trade and travel shutdowns bite.

Policymakers have responded by opening the taps. Central banks are injecting nearly $6 trillion, while leaders of the Group of 20 major economies have pledged to inject more than $5 trillion.

Combined, these totals are far in excess of what was delivered after the 2008 global financial crisis.

"This shock has brought forward the paradigm shift from central banks as the only game in town to monetary-fiscal coordination."

The U.S. Federal Reserve's money-printing expansion already amounts to all purchases done under its quantitative easing programs over 2008-14, according to Donzé.

Central banks and governments are also guaranteeing swathes of company debts and embracing policies that were very recently regarded as radical, such as providing cash directly to citizens or paying the wages of those at risk of unemployment.

Below are three charts detailing the scale of the monetary and fiscal firepower unleashed:

The world's five biggest central banks - the Federal Reserve, the European Central Bank, the People's Bank of China, and the Bank of Japan and Bank of England - are delivering stimulus worth $5.7 trillion this year, or 9.7% of gross domestic product.

The G10 economies have slashed interest rates by more than 300 basis points combined since March 3, the day the Fed implemented an emergency rate cut. Rates have hit record lows in most countries. Globally, more than 3,000 basis points worth of rate cuts have been delivered, analysis by Reuters shows.

FISCAL TO THE RESCUE

The budget firepower unleashed by the biggest economies has been eye-popping; even Germany with its dedication to balanced budgets could need to borrow an additional 350 billion euros or so ($388 billion) this year to fund a huge new stimulus plan.

Leaders of the G20 group of countries said on Thursday they would inject more than $5 trillion, but this figure includes credit guarantees for businesses that are not actual new spending.

According to Reuters calculations, the G10 economies plus China are expected to spend an extra $3 trillion in various forms - from payouts to citizens to tax breaks.

Other big nations such as India and Brazil are also adding tens of billions of dollars in expenditure.

The size of the global fiscal splurge is expected to rise sharply as more countries, including Japan, ramp up spending.