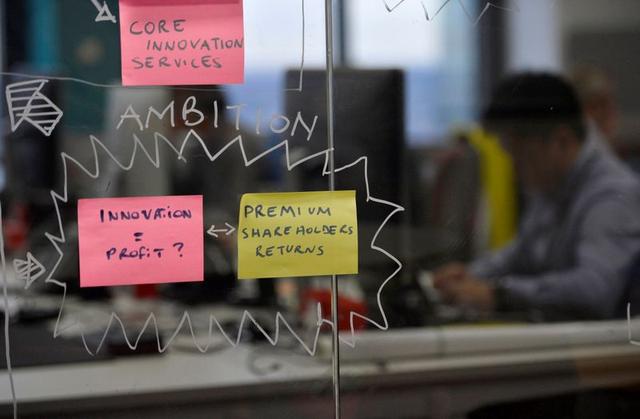 Post-it notes are displayed in the UBS ''fintech lab'' at Canary Wharf in London, Britain, October 19, 2016.
By Liam Proud | LONDON

LONDON (Reuters Breakingviews) - Anne Boden’s “Banking on It: How I Disrupted an Industry” covers all the bases of a standard startup book: breezy platitudes, neat a-ha moments, and near-death experiences reinterpreted after the fact as blessings. Beneath the banality, however, is a provocative theory of why the digital-banking model will triumph. It’s plausible, even if the book’s victorious tone is premature.

Aside from her fondness for cliché, Boden is far from a typical entrepreneur. For one, the founder of UK-based Starling Bank is a woman and over 40. And unlike many of the entrepreneurs who set up rival digital lenders Monzo, N26 and Revolut, she has extensive experience of the sector she’s trying to disrupt. Before founding Starling in 2014, Boden was chief operating officer of Allied Irish Banks, following spells as a senior banker at Royal Bank of Scotland and Dutch lender ABN Amro.

Her big insight is that mobile-based financial services will turn retail banking on its head. By starting from scratch, without the baggage of physical branches and decades-old IT systems, digital banks can offer a slick app with a tiny cost base. In theory, that means they could make money just from current accounts, which most lenders view as a loss-leader for more lucrative overdrafts and credit cards. Boden reckons Starling can generate a decent return just from interchange fees, paid by merchants every time a customer uses their card, and lending out deposits. It can also earn commissions by offering third-party products like insurance and savings.

Boden’s clunky telling of Starling’s story obscures this thesis. She dedicates five pages to a mundane recollection of how and where she and two colleagues road-tested an early version of the bank’s card. Throughout the book, she puts implausibly long sentences in the mouths of colleagues and acquaintances. A summer 2014 exchange includes an 83-word quote from rival Tandem Money founder Ricky Knox. Either Boden recorded her conversations, or she’s taking an unusual amount of artistic license with the dialogue.

Her decision to settle old scores with Monzo also seems odd. The rival digital bank’s founder Tom Blomfield was initially Starling’s chief technology officer. On Boden’s telling, he staged a failed coup and subsequently left with most of the fledgling bank’s employees. Denise Kingsmill, a member of the House of Lords and company director who was involved with Starling at the time, has called Boden’s account “one-sided”. In any case, Boden is surprisingly unreflective about why such a dramatic fracture happened under her watch. A brief anecdote about an awkward Sunday lunch at her house, where Blomfield purportedly thought one roast chicken would feed 10 people, only adds to the mystery.

Starling’s recent performance nevertheless gives Boden reason to gloat. The bank has continued to hoover up deposits during the pandemic, hitting 4 billion pounds in October, with revenue running at an annualised rate of 108 million pounds. It’s finally generating a slim operating profit – roughly 10 million pounds on an annualised basis, the company said on Friday. By contrast, Monzo’s auditor said in the summer that the company’s ability to continue as a going concern was “subject to material uncertainty”.

Indeed, underneath Boden’s bland prose is a sustained argument for the resilience of Starling’s model. Unlike racier financial technology peers, it does not depend on volatile foreign exchange fees or risky unsecured consumer credit. And in contrast to big banks, it has a slick and adaptable IT system which allows it to launch new products in weeks rather than years. During Britain’s Covid-19 lockdown, Starling allowed customers to request a second debit card with a separate balance. The innovation, which was handy for quarantined people whose neighbours were doing their shopping, was designed and launched within 10 days.

Older lenders like Lloyds Banking Group and HSBC, invariably the product of numerous mergers, can’t keep up. For every pound Starling spends on developing a new product, traditional banks would have to spend an order of magnitude more to ensure that it meshed into their patchwork of legacy computer systems.

Yet it’s far too early to proclaim the victory that Boden’s use of a past-tense subtitle implies. Even after breaking even, the bank will be some way from generating enough profit to reward investors who have poured in hundreds of millions of pounds.

The biggest risk is that most people simply don’t care enough about the digital bells and whistles to bother moving from their current bank. In that scenario, growth at Starling and its rivals could stall before they attract enough customers to earn serious money. “Banking on It” suggests that Boden has at least as good a chance as anyone else of making it work. Yet a second edition of the book would benefit from the inclusion of one more platitude: sustained profits, not products, are the ultimate mark of a successful business.