Inside the Philip Morris campaign to 'normalize' a tobacco device 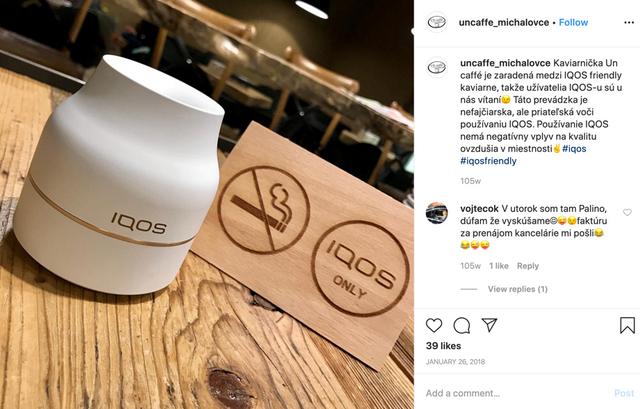 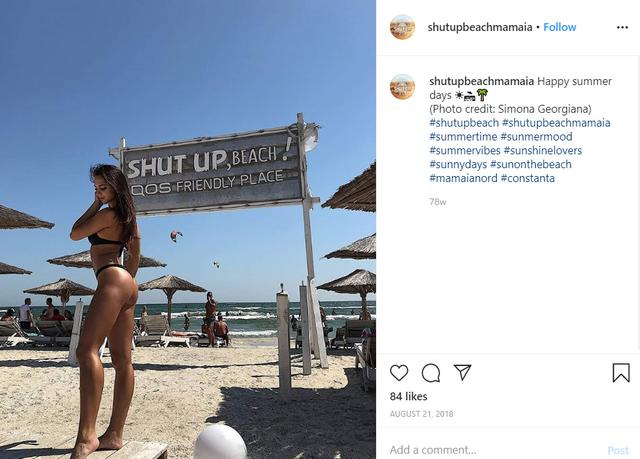 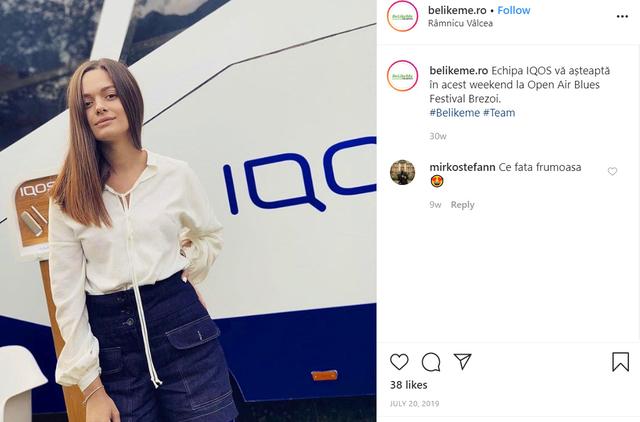 3/7
FILE PHOTO: A screenshot shows a young woman posing in an Instagram post July 20, 2019 by Be Like Me, a Romanian marketing agency that promotes the IQOS device on behalf of Philip Morris International Inc. Be Like Me via
Reuters. + 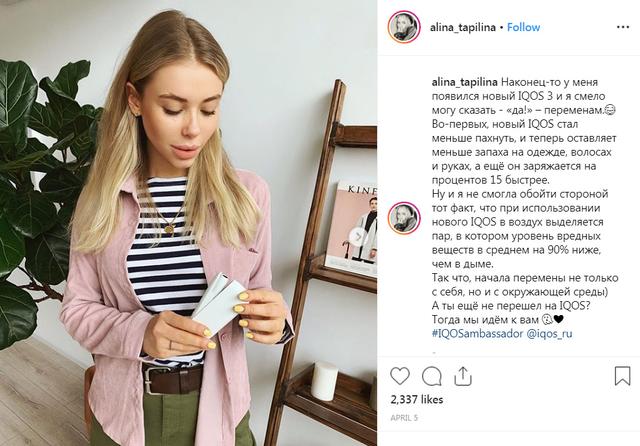 5/7
FILE PHOTO: A screenshot shows Alina Tapilina holding a ''heated tobacco'' iQOS device as part of a campaign by Philip Morris International to market the device, in an Instagram post April 5, 2019. Alina Tapilina via
Reuters. +

6/7
FILE PHOTO: A screenshot shows two young women holding IQOS devices as they pose in an Instagram post November 23, 2019 by Be Like Me, a Romanian marketing agency that promotes the IQOS device on behalf of Philip Morris International Inc. Be Like Me via
Reuters. + 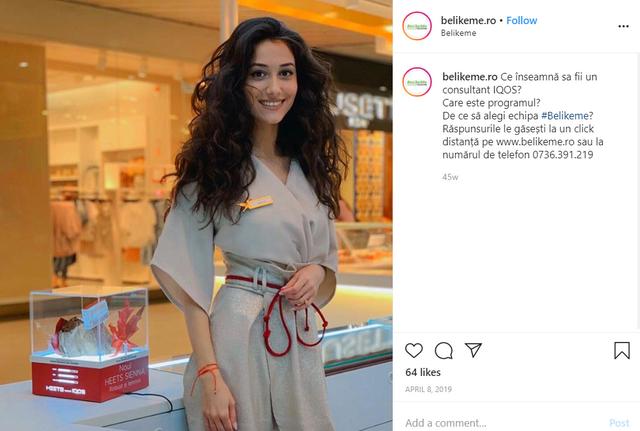 7/7
FILE PHOTO: A screenshot shows a young woman posing in an Instagram post April 8, 2019 by Be Like Me, a Romanian marketing agency that promotes the IQOS device on behalf of Philip Morris International Inc. Be Like Me via
Reuters. +
By Chris Kirkham

At Germany's Bambi Awards for the media industry in November, celebrities posed for red-carpet photos against a backdrop of established luxury brands. Alongside the likes of Mercedes-Benz and Swiss watchmaker Chopard was a newer name: IQOS, a "reduced risk" heated-tobacco device sold by cigarette maker Philip Morris International Inc.

Across Europe, Asia and South America, the tobacco firm has affixed the IQOS brand to music festivals and art exhibits. The company also markets through IQOS lounges at mountainside resorts in the Pyrenees and in fashionable neighborhoods of Rome. Throughout Europe, it has partnered with "IQOS friendly" bars and restaurants - closed to cigarettes but open to IQOS.

Such promotions are part of a wide-ranging "normalization" strategy by Philip Morris (PM.N) to scrub its image as a purveyor of cancer-causing cigarettes and present its new smoking alternatives as youthful, upscale lifestyle products, according to a ten-month study by tobacco researchers at Stanford University, who shared it exclusively with Reuters before its release on Friday. The marketing strategy mimics that of tobacco companies in the mid-20th century, when they started associating cigarettes with Hollywood and high society.

"Philip Morris, as a company name, is somewhat of a pariah," said Robert Jackler, a professor who led the study and heads Stanford's Research into the Impact of Tobacco Advertising. "IQOS is an attempt to sanitize their product line."

The Stanford researchers said their study was spurred in part by a May 2019 Reuters investigation that found Philip Morris had used young online personalities, including a 21-year-old woman in Russia, to promote IQOS. The company's internal marketing standards prohibit it from using youth-oriented celebrities or "models who are or appear to be under the age of 25." The Reuters report prompted the company to acknowledge it had violated its own policy and to suspend its use of social media influencers.

The Stanford study found that, although the company suspended its "most visible" social-media influencer programs, IQOS marketing continues to stray substantially from its corporate standards on youth-oriented marketing.

"Its use of youth-oriented social media channels, trendy pop music festivals and celebrity influencers are mis-aligned with their commitment to exclusive 'adult smoker' targeting," the Stanford report concluded.

Philip Morris declined to answer detailed questions from Reuters on its IQOS marketing strategy and the Stanford findings, saying it did not have access to the full report. "However, we doubt that there is anything PMI could say or do that Dr. Jackler, and others who criticize our scientific commitment and smoke-free vision, would ever find satisfactory."

The IQOS device is central to the firm's efforts to overhaul its image through such initiatives as its "unsmoke" campaign, which promotes such "smoke-free" alternatives as a way to accelerate the shift away from cigarettes. The device heats up but does not burn packages of ground-up tobacco, which resemble small cigarettes, to create a nicotine-filled aerosol that is similar to that produced by e-cigarettes, which heat flavored liquid nicotine.

At this year's Davos World Economic Forum in Switzerland - a gathering of some of the world's richest people - Philip Morris set up an "Unsmoke your mind" lounge, where panelists argued against regulations preventing "truth in marketing" by tobacco firms looking to promote smoking alternatives.

IQOS is sold in about 50 countries, including the United States through a partnership with U.S. Marlboro maker Altria Group Inc. The two companies pledged to regulators that they would market the device only to adult smokers, showing sample advertisements of adults conservatively dressed in business attire.

But in other markets across the world, the Stanford study said, Philip Morris uses "coaches" and "ambassadors" to market IQOS. In Romania and Russia, employment agencies recruit attractive women as young as 19 to market IQOS, according to job postings mentioned in the Stanford report and reviewed by Reuters.

Instagram postings for Be Like Me, a Romanian marketing agency, show young women posing with the IQOS device in recent months, often wearing robe-like uniforms in malls. The Instagram account for RBT Group, a staffing agency in Russia that markets IQOS, similarly shows photos of attractive young women in front of IQOS signs or posing with other "coaches."

Other Instagram accounts with the "IQOS" name, including one called "iqostyle.arm," based in Armenia, continue to show young women posing with the IQOS in what appear to be professional photographs. One photo on that account from last July - two months after Philip Morris said it had suspended all influencer marketing - showed Nika Shuvalova, a 22-year-old Ukrainian model, posing in a swimsuit on a boat with an IQOS.

A message sent to the "iqostyle.arm" Instagram account was returned by someone calling themselves Tiko, who said the IQOS postings were a "hobby" and that he had not been paid by Philip Morris.

BIG BET ON IQOS AND 'NORMALIZATION'

The stakes for Philip Morris are huge: The company invested $6 billion in developing "smoke-free" products such as IQOS in hopes of staving off a trend of declining global cigarette sales. In 2018, company CEO Andre Calantzopoulos told shareholders that it hoped to receive about 40% of its revenue - nearly $20 billion - from "reduced risk" products by 2025.

Internal Philip Morris documents underscore the importance of its larger strategy: "Make 'normalization' a PMI priority and imbed this mindset into the organization," read an internal company document from 2014, reviewed by Reuters as part of a 2017 investigation. The document also cited "the threats posed by PMI/industry de-normalization" - such as lobbying bans and exclusions from international treaties and trade agreements - "and the need to reverse this trend to drive future growth."

The Stanford researchers pointed to wide-ranging company efforts to associate IQOS with fashion, art and popular culture in a way that cigarette brands such as Marlboro have been unable to do, given changing social attitudes and laws around the world that prohibit such advertising and promotions.

IQOS has been present at events such as Germany's Bambi Awards - which honor stars in TV and film, sports, art and music - as well as that country's Playboy Playmate of the Year Awards.

Philip Morris worked with British sculptor Alex Chinneck on a dramatic installation at the 2019 Milan Design Week. The work depicted the facade of an old, two-story building being unzipped like a pair of jeans - meant to signify the IQOS "notion of opening the future," the sculptor said in an interview with FAD magazine. A representative of Chinneck confirmed the partnership.

The company also worked with distinguished industrial designer Karim Rashid to create an installation at the previous year's Milan Design Week. In an interview with website fashionrepublik.com, Rashid described his installation, showing two faces meeting one another, as similar to the IQOS, which he called “an intimate device that speaks to forward-thinking and original expression.” A representative of Rashid said he was unavailable for an interview on Thursday.

GETTING TOBACCO BACK INTO RESTAURANTS, BARS

The company has also sought to distinguish IQOS from smoking through partnerships with restaurants, bars and salons who designate themselves as "IQOS friendly" spaces, where cigarettes are banned but the IQOS device is allowed. The Stanford researchers found evidence of hundreds of "IQOS friendly" establishments in places such as the Czech Republic, Ukraine, Romania and Japan.

Philip Morris did not respond to questions about its business relationships with the establishments that promote the device and display its branding.

The Stanford researchers and other experts say such policies undermine public smoking laws and encourage dual use of cigarettes and alternative devices. Many users will continue smoking outdoors, but turn to e-cigarettes or IQOS where they are permitted indoors. Such switching can “deepen nicotine addiction and make cessation less probable,” the Stanford report said.

The brand also had a presence at a Tel Aviv University student music festival last year - where the minimum age for entrance was 16, and where a video showed young IQOS staff at a pop-up booth.

At a launch party for IQOS in Albania last year, a performer in an elaborate white sequined dress did an interpretive dance on stage with an IQOS, while another performer attached to wires performed acrobatic moves in the air while playing a violin.

"They're trying very hard to resurrect the glory era of smoking, where it was glamorous and sophisticated and stylish," Jackler said. "It's about associating it with all the good things in life."