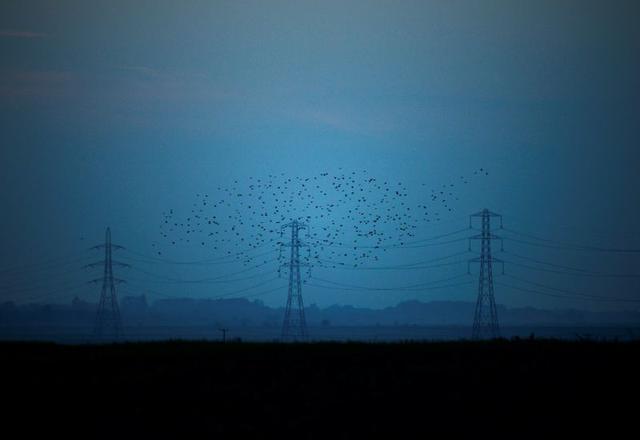 FILE PHOTO: Migrating starlings fly at dusk past electricity pylons silhouetted by the sunset of a clear autumn evening in the Kent countryside, in Graveney, Britain, October 26, 2015.
Reuters/Dylan Martinez/File Photo

LONDON Britain's energy market regulator Ofgem recommended on Monday that an independent body be set up to help lead the way to the government's goal of net zero emissions by 2050.

Ofgem said the the body should be fully separated from National Grid and run the electricity system, helping to charge millions of electric vehicles and enabling a huge increase in renewable power while maintaining secure energy supplies.

Last month, the government said it would consult on reviewing the management of the country's energy system.

Ofgem, which will work closely with government in its review, estimates that an independent body with new responsibilities for running the electricity system could save consumers between 0.4-4.8 billion pounds ($6.6 billion) from 2022 to 2050.

The body could design and plan new grid infrastructure and provide independent advice to the government on how best to hit its target of net zero emissions by 2050, Ofgem said.

"I welcome Ofgem’s contribution to the debate over the future structure of our energy system and will consider its recommendations thoroughly," said Kwasi Kwarteng, the government's Business and Energy Secretary.