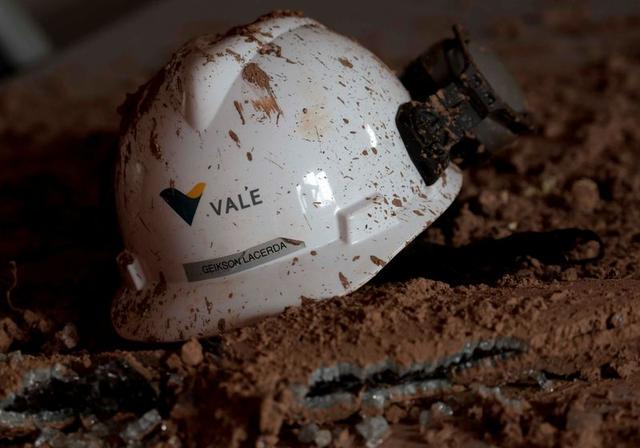 FILE PHOTO: A helmet with a logo of Vale SA is seen in a collapsed tailings dam owned by the company, in Brumadinho, Brazil February 13, 2019.
Reuters/Washington Alves
By Gram Slattery and Marta Nogueira | RIO DE JANEIRO

"It's obvious from the report that profound changes in corporate governance and risk management need to be made if new disasters like those which happened in Brumadinho and Mariana are to be avoided," José Adércio Sampaio, the head federal prosecutor investigating the dam burst, told Reuters.

Brazil-listed shares in the company, which reported middling fourth-quarter results on Thursday, were down some 4% in Friday afternoon trade, a much steeper decline than the Brazil's benchmark Bovespa equities index which was off 1.1%.

In January 2019, the company's B1 dam in the town of Brumadinho burst, unleashing a river of toxic mining waste that crushed a Vale dining hall and destroyed parts of the nearby countryside - the miner's second fatal tailings dam accident in less than four years.

A similar disaster at a joint venture with BHP Group in 2015 left 19 people dead in the town of Mariana and brought even graver environmental consequences.

Since the Brumadinho collapse, evidence has emerged that employees at Vale and at inspection companies it hired knew the dam was risky but did not act. In January, state prosecutors indicted Fabio Schvartsman, chief executive at the time of the dam burst, for murder.

The 50-page report, released a day before a five-day holiday break in Brazil, had been commissioned by Vale, and was prepared by an independent committee that included a former Brazilian Supreme Court justice.

It said the company had information dating back to at least 2003 attesting to the B1 dam's instability, but no significant action was ever taken.

The report found that Vale's divisions were "siloed" in such a way to prevent internal issues or problems from being aired widely. It also cited "a work environment that lacked transparency and that did not encourage personnel to raise concerns and/or question leadership decisions."

Vale changed compensation practices after Brumadinho to give greater weight to safety and also created a new risk management structure including a an executive board focusing on safety and operations that reports to the company's new CEO, Eduardo Bartolomeo.

Vale's general counsel downplayed the report during a call with analysts on Friday, saying there were "no new facts" that police and prosecutors did not have already.

The company faces billions of dollars in potential liability and criminal cases that could go on for years. On Friday, it acknowledged that it could have to boost provisions by $1 billion to $2 billion as part of a global settlement.