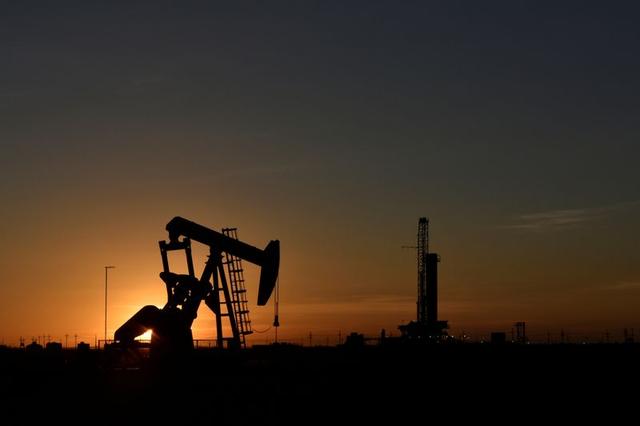 FILE PHOTO: A pump jack operates in front of a drilling rig at sunset in an oil field in Midland, Texas U.S. August 22, 2018.
Reuters/Nick Oxford

The U.S. oil rig count rose for a third week in a row even though growth in the country's largest shale formation slows as producers cut spending on new drilling for a second consecutive year.

Companies added one oil rig in the week to Feb. 21, bringing the total count to 679, their highest since the week of Dec. 20, energy services firm Baker Hughes Co said in its closely followed report on Friday.

In the same week a year ago, there were 853 active rigs.

U.S. crude futures traded around $53 per barrel on Friday, and were on track for its second straight week of gains. [O/R]

The oil rig count, an early indicator of future output, dropped by an average of 208 rigs in 2019 after rising 138 rigs in 2018 as independent exploration and production (E&P) companies cut spending on new drilling to meet shareholder demand for better financial returns in a low energy price environment.

The U.S. government this week forecast shale oil output is expected to rise by about 18,000 barrels per day (bpd) in March to a record 9.18 million bpd, boosted by gains in the Permian Basin, the biggest formation and driver of a shale oil boom that helped make the United States the biggest oil producer in the world.

However, production at the Permian Basin of Texas and New Mexico was expected to see its smallest monthly increase since September, while output was forecast to remain flat or decline in the other six major shale formations.

Drillers could scale back investment in production more quickly than previously expected this year after prices slid for natural gas liquids (NGLs) like propane and butane, which had been a lucrative by-product of their operations.

The number of U.S. gas rigs, meanwhile were unchanged at 110.

Year-to-date the total number of oil and gas rigs active in the United States has averaged 791. Most rigs produce both oil and gas.

(Reporting by Eileen Soreng in Bengaluru and Scott DiSavino in New York; Editing by Marguerita Choy)